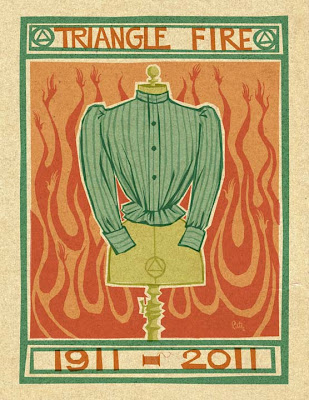 The Triangle Shirtwaist Factory fire in New York City on March 25, 1911, was the deadliest industrial disaster in the history of the city of New York and resulted in the fourth highest loss of life from an industrial accident in U.S. history. The fire caused the deaths of 146 garment workers, who either died from the fire or jumped to their deaths. Most of the victims were recent Jewish and Italian immigrant women; the youngest were two fourteen-year-old girls. Many of the workers could not escape the burning building because the managers had locked the doors to the stairwells and exits. People jumped from the eighth, ninth, and tenth floors. The fire led to legislation requiring improved factory safety standards and helped spur the growth of the International Ladies' Garment Workers' Union, which fought for better working conditions for sweatshop workers.
Posted by Peter Emmerich at 3/26/2011

The Art of Caitlyn Dailey said...

LOVE THIS! And the hands!? Great idea.

LOVE IT! Everything about this works perfectly.

Thank you guys. I appreciate your comments on this one. The tragedy and its circumstances has always intrigued me and repulsed me, so I felt the need to make something.

I'd like to share this with my 12 year old daughter, possibly for use in her class. May I "borrow" this to get it greater exposure, with attribution? Wonderful, horrific image...