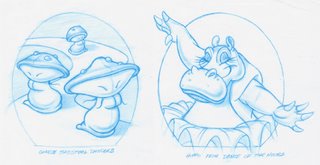 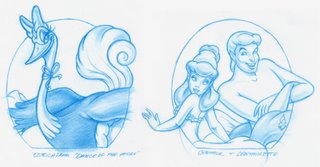 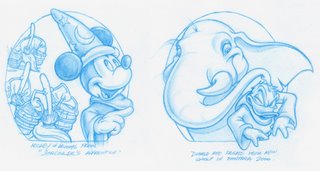 When I took over as chief illustrator for The Disneyland Resort, one of my jobs was to design new illustrations for "Disney Dollars". I was excited about the project because I remember when they came out (I was a child visiting Walt Disney World when they were released) and thought it would be a great time to do something different other than just using portraits of Mickey,Minnie, Donald, & Goofy as they had used for so long. Even the management showed excitement for a change and was happy to see something new,and approved everything I sent along for a concept.

Images were chosen and we were going to highlight Fantasia and Fantasia 2000 (It was being released that year) and I thought I did some concepts worth looking at. In the end, one week before the images had to go to the US Mint to be printed (Yes they are actually printed at the Mint and are considered legal tender) the idiots I worked for (Yes, they were two of the stupidest people I ever met) decided the illustrations were too avant-garde and might not be collectible enough and I had less than one week to redesign them from start to finish using portraits Mickey, Donald and Goofy.

Royalty at the Beach! 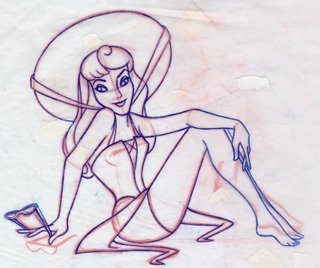 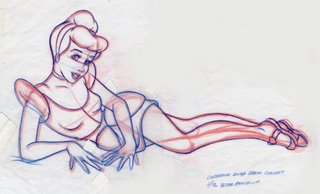 When I was at Disney I was asked to do some sketches of what the Princesses would look like dressed to go to the beach. I recently came across a couple of them, and I thought I would post them considering the idea never went anywhere. It was fun to modify their costumes I must admit. Please keep in mind they never got past the rough drawing stage so excuse the overall crudeness.
Posted by Peter Emmerich at 8/26/2006 3 comments:

"His hands were quick,his fingers strong..... 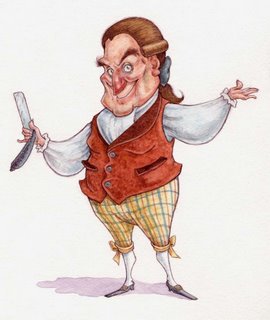 ....it stung a little, but not for long. And those who thought him a simple clod were soon reconsidering under the sod. Confined there with a friendly prod, from Sweeney Todd, the Demon Barber of Fleet Street."
Posted by Peter Emmerich at 8/08/2006 7 comments: 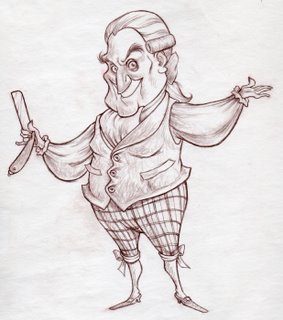 I have to be honest , I was not truly happy with my Sweeney design. As a character on his own he was scary and skeletal, but I think I overshot. I decided to set the story further back in time (the early 19th century) and to make him more of a man than a monster. He relates better now to my Mrs. Lovett and will be much more fun due to his wig and fancier clothes. Feel free to share your thoughts.
Posted by Peter Emmerich at 8/02/2006 2 comments: