"You can be a BARBER again!"

In the story "Sweeney Todd: the Demon Barber of Fleet Street" Sweeney has been wronged by the corrupt Judge Turpin who (fifteen years earlier) raped his wife, stole his child and finally sent him to jail in Australia. When this happened his neighbor Mrs. Lovett took Sweeney's razors and kept them thinking " Who knows? The poor silly blighter might be back again someday and need 'em!"

In this scene Mrs. Lovett informs Mr. T (as she calls him) that he doesn't have to resort to living in the sewer or the plague hospital upon his return but can in fact be a barber again. She has no idea what she has started! 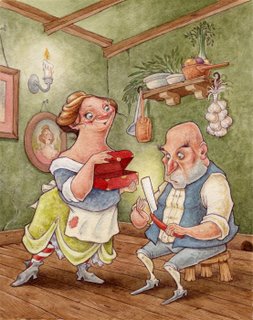